The AR-15 is probably the most modular weapon in the United States. Due to simple demand for different kinds of rifles you can mix and match ARs to your heart’s content. One of the more interesting and complicated aspects of AR ownership is short barreled rifles. A short barreled AR-15 is any AR that has a shoulder stock, with a barrel length of less than 16 inches. One of the biggest considerations if you want a short barreled rifle is the NFA. The National Firearms Act, or NFA for short, is a piece of legislature going all the way back to the 1930s. The NFA regulates short barreled rifles, short barreled shotguns, silencers, any other weapons, destructive devices, and machine guns.

The SBR Advantage
Before we dive into laws, regulations and how to, let's look at the advantages and disadvantages of a short barreled rifle.

Advantages
A shorter rifle is easier to maneuver in and out of buildings and vehicles. For home defense, a shorter rifle is easy to use and put into action. Shorter rifles are lighter and well balanced. A short barreled AR-15, once registered, can be used as both a standard size and short rifle. Plus shorter weapons are both a literal and figurative blast to shoot. You can use a caliber like 300 Blackout and 9mm to eliminate a lot of lost velocity and to ensure the round will still expand.

Disadvantages
A short barrel rifle is going to start losing velocity in most calibers. Velocity loss means you are going to lose a lot of terminal ballistics potential at longer ranges. Loss of velocity can also cause expanding ammunition to fail to expand. Also, that literal blast can be blinding and when you trim the barrel there is considerably more noise.

Back to the NFA
The National Firearm Act allows the ownership of SBRs but does have a few requirements. You have to fill out a variety of paperwork. If you are purchasing an SBR from an individual or an FFL/SOT you have to fill out a form 4. If you are planning to build your own SBR you would file a form 1. Both forms are relatively simple. Along with the forms, you’ll need to submit a passport-sized photo and a set of fingerprints.

With your paperwork, and photos you’ll also have to notify the Chief Law Enforcement officer in your area. You do not need their permission, merely a statement of declaration on your form 1 or 4. After that is done you can file electronically or by mail, and have to pay a 200 dollar tax stamp fee. Then the waiting process begins. The process can take anywhere from 3 to 6 months to be approved.

Failure to follow the rules
The law sucks, is slow, and antiquated. However, failure to take it seriously and making a short barreled rifle without the ATF’s permission is a big no-no. The penalty can be quite harsh. It includes up to 10 years in club fed and a fine of 250,000 dollars. I wouldn’t tempt fate making an SBR without the ATF’s permission and a tax stamp in hand.

How to Build an SBR
You can always buy an SBR AR-15 from a SOT dealer, but this isn’t necessary. If you already have an AR 15 and you desire to make it a short barreled rifle you’ll save considerable expense. You can also keep your rifle in a rifle configuration with a 16-inch barrel and enjoy shooting until your tax stamp comes back approved.

The cheapest method is to buy an AR-15 pistol. Once bought you can shoot it as a pistol, and once you’re approved you add a stock and new buffer tube. Stocks and buffer tubes are cheaper than new upper receivers.

Now when you take the building route you will have to take your lower receiver and place a name and serial number on it. If you go with a trust you’ll put your trusts name on the lower receiver, and a serial number. I’m not a lawyer, so I’m going to include links to the relevant information.

It’s simple
Once you get your form 1 you can build an SBR by taking a traditional pistol upper receiver and bolting it on your registered lower receiver. You can also use alternate calibers for your build. So an AR-15 sbr in 5.56 can be converted to 9mm and 300 Blackout whenever you desire. That is one of the joys of using the AR-15 platform. It’s easy to convert to a variety of calibers, even when it's a registered SBR.

Purchasing an SBR
If one wanted to purchase a pre-built SBR they could do so. This would eliminate the need to engrave a serial number. Several high-end companies are producing factory SBRs, including Daniel Defense and AAC. Purchasing an SBR means it has to remain at the gunshop until the tax stamp comes back. You’ll also have to find an FFL with a Special occupation tax, or SOT. This allows them to sell and buy NFA weapons. These stores can be invaluable if you are unsure of the process, and will often help with the paperwork.

Get Short
If you plan to go short, regardless of buy vs build, do it the right way. Uncle Sam isn’t one to mess around. This is one tax you don’t want to fool around with.

Best red dot optics for your next build. Red dots are a versatile optic that can be used on a number of weapons. Make sure you get the features you are looking for. Read more

The ultimate guide to building your custom AR-15. We go through each step and show you the process to assemble an AR-15. Read more 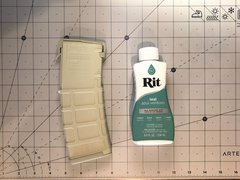 How to dye PMAGS: A Complete Guide

Ever wondered how people got PMAGs in crazy colors that you can't seem to find on the Magpul site? We will show you how to dye a PMAG any color that you wish. Read more

With all the options on the market, we break down our top picks for the best AR-15 triggers to add to your next build. Read more 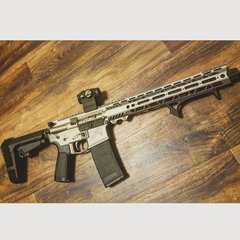 Looking for an idea for your next build? Need a new truck gun or something for home defense without trying to break the bank? You can now build your next AR-15 for under $500... Read more